Before starting, this article is built on top of How to create an OData reporting service in ASP.NET 4.5 but you can easily adapt it to any of your project. The code is in the same git repository as the previous article, in the branch recursive-complex-type, on GitHub.

We are trying to solve the following use case (at this stage, code will fail at runtime).

The commit title is Use case: the problem., if you want to try the failing code.

Have you noticed the property public ICollection<MyComplexType> Children { get; set; } in the class MyComplexType ?

Well this, the EDM model builder does not like, and since it is not uncommon to have such a data structure, let’s trick that evil model builder into allowing it ;)

The configuration look like this (in WebApiConfig.cs) - nothing fancy here:

This is what happen when you run the code:

Before going further, i added a layer of realism to the projet. I avoided to include external libraries like a DI container or AutoMapper to focus on the demo code instead of one specific technology.

Basically, i simulated a more real-life-like application where we have database entities and DTO’s (data transfer objects).

You can compare a DTO to a view model, but instead of being sent to a view and displayed as HTML (in case of the Web), it is serialized in JSON1 and sent to the client that way.

1 Note that the DTO’s serialization does not have to be in JSON, it could be XML or any other way you’d like. DTOs are a concept and they are not bound to any implementation or technologies, beside the object-oriented programming paradigm.

The new and updated classes

Lets take a look at the new stuff and let the code talk by itself :)

If you are not interested in the project infrastructure, you can jump right to: The solution.

If we run the code, we still have a problem… It’s a more real-life-like problem, but it’s still a problem…

This will break the cycle:

The data model MyDatabaseComplexType.Children property reference itself. No big deal here, the static repository has no problem storing that kind of data.

In a real database scenario we could add an id property to the MyDatabaseComplexType class. That said, for some reasons, we might not want to transfer that id to the client - that’s basically the problem that inspired this article.

The transfer model contain the same recursive loop of complex types since it is a copy of the data model (for now).

By using the little technique displayed in the previous graph, we will create what I call a “two-level-circular-dependency” (i don’t know if that term exists but it sounds good).

By updating the transfer model to the following, the EDM model builder will never notice and the circular dependency will be “broken” (look for MyComplexType1 and MyComplexType2):

I also updated MyODataModelMapper to handle the changes to the transfer model as follows (this is basic mapping code, it is not that important):

In a browser, a GET request to http://localhost:1079/odata/MyODataModel will result in: 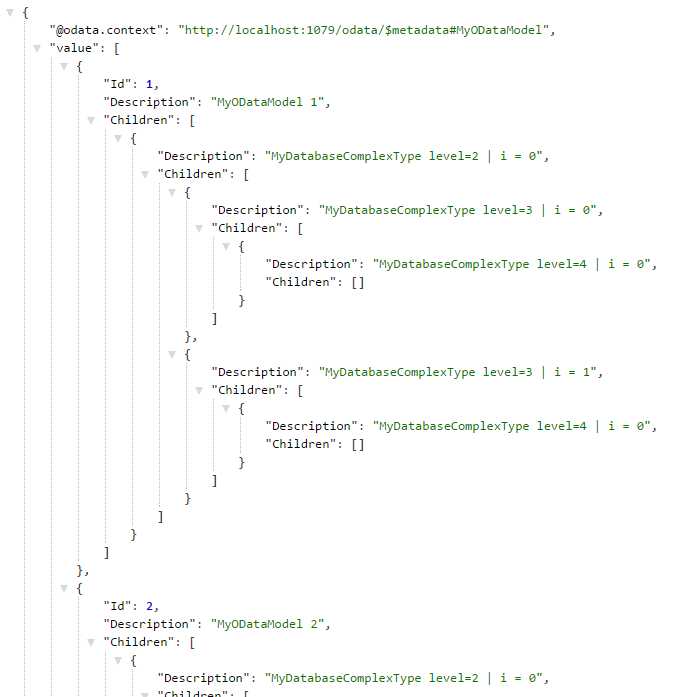 With a bit of imagination and some programming experience, it was easy to trick the EDM model builder.

To break the cycle we converted the following “circular dependency” to a “two-level-circular-dependency”, as follows:

I hope you enjoyed, happy coding!