Today we will take a look at how to propagate errors using Exceptions. I will do my best to keep the article as simple as possible with lots of code samples. I believe that learning the basics is essential in programming.

You must understand what is a class, a type, a property and have a basic knowledge of inheritance.

What is an Exception?

An exception is a particular Type representing an error. It must derive (inherit) from Exception (directly or indirectly).

You can do two things with exceptions:

You don’t want your system to crash every time a user sends you an incorrect input, right? Well, let’s start by crashing it anyway!

Exceptions, when thrown, are propagated down the execution stack (unwinded) until handled (catch-ed). If they are not, your program will crash (partially or entirely).

Here is a visual representation of this: 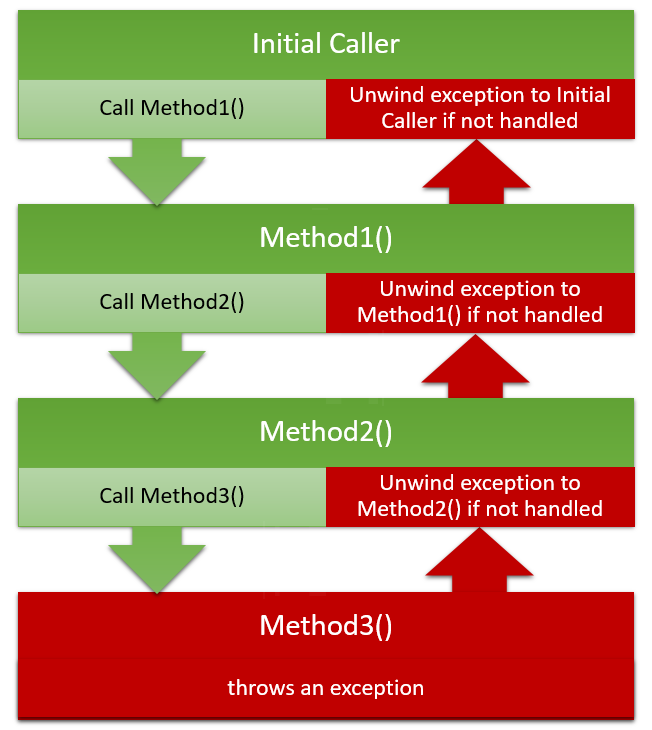 Frameworks, SDKs and what not, throws exceptions to alert you, the developer, that an error occurred. Don’t worry; you can throw some too in your own programs!

Or, with some custom error message:

Now that we saw the Exception class briefly, let’s take a look at other predefined exceptions type, provided by the .NET framework:

Anatomy of an Exception

Let’s take a look at the most commonly used properties of the Exception class.

The Message is probably the most used property of the Exception class; it represents the error message.

The InnerException is the source of the Exception. You can also see this as the underlying error or as a sub-error.

The StackTrace property can help you diagnose the error and pinpoint its source. This contains the execution stack that causes the error.

The Source property gives you the name of the application or the object that caused the error. This is not always useful but can be.

I more often simply jump to the StackTrace instead. The top line is the frame where the Exception has been thrown.

To create a custom exception, you need to create a class that inherits from another exception.

It is as easy as this:

By convention, you should suffix your class name with Exception.

Then you can throw it like any other exception:

You can enforce a specific message for a particular type of exception, or allow the caller code to create a custom message by exploiting the base constructors.

You can even create a specific message with useful parameters:

From this point, I will leave your imagination to think of other ways of using custom exception.

Throwing errors is exciting and all but what about handling them? To do that, we will use the try and catch keywords.

Here is an example:

If we take a more in-depth look at the catch block, there is no way to access the Exception instance and most of the time you want access to the exception’s properties (ex.: the error message), let’s see how to fix that:

To go a little further, we can add multiple catch blocks that each handles a different type of error. Let’s see how:

Also, the name of the variables might need to be different for each catch block.

Tip of the day

If you are creating a system from scratch, creating a custom base exception can be a great idea. For example, in some component of your system, you could handle your custom exceptions and system exceptions differently.

This could be done by two catch blocks: catch (MyCustomException) and catch (Exception).

Once again, this is an introduction to exceptions; I will leave your imagination to it, for now.

As stated in the official documentation: In general, you should only catch those exceptions that you know how to recover from.

Therefore, if you can only do so much within a catch block, don’t catch it or catch it, do your thing, then rethrow it (see below).

Sometimes, you want to do something with an Exception then rethrow it, so it continues to “move down” the execution stack. You can do that in a catch block with throw;.

Using throw; like this has the advantage of preserving the exception StackTrace.

You can also catch an exception and throw another exception instead.

To achieve this result, MyEvenMoreMeaningfulException simply use one of the Exception constructor, passing to it the InnerException.

There is one last throw case that we can cover, which is similar to throw; but it will not preserve the StackTrace of the original error:

You can also create a catch block specifying no type at all. If you are working with a recent version of C#, this will behave the same way as catch (Exception) but it is not recommended.

If you are using an older version of C#, well this is a little different. That said, explaining this is out of the scope of “a beginner guide to exceptions”. The reason why I mentioned it is that you know it exists.

There is another keyword that we haven’t talked about yet; it is: finally. The finally keyword allows you to create a block of code that will always be executed, whether the “try” code throws an exception or not. This is very useful to ensure that IDisposable objects are disposed of correctly.

You can add a finally block after a try block with no catch block or after all your catch blocks.

The compiler does wrap using code blocks in try/finally blocks. See below for more information.

Under the hood (using)

Since I talked about it, here is an example of a using statement, and it’s IL counterpart.

Here is the using example:

Exceptions are very easy to use and are a very powerful mechanism, but they are also more costly than a hand-crafted solution like “operation results”.

Feel free to leave your questions and comments below.

My next article will talk about “operation results” as an alternative way of communicating errors between components.

Until then, happy coding!