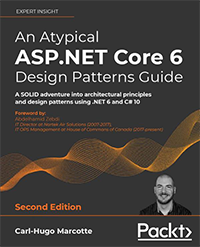 In this article, I introduce you to Boolean algebra, a branch of algebra that evaluates the value of a condition to true or false. This is a fundamental part of programming that you can’t escape, and you will use this until the end of your programmer career and maybe even beyond that point.

The article is not focusing on mathematical applications and representations but on programming. The objective is to give you the knowledge you need for the next article of the series.

This article is the first part of a sub-series showcasing the following articles:

In C#, bool is the type that represents a boolean value. A bool can have a value of true or false. A bool is the memory representation of a bit. A bit is a base 2 digit that is either 0 or 1. The value 0 means false, and the value 1 means true.

Want to know more? The mathematic that we learn at school is base-10; a.k.a., there are 10 numbers: 0 to 9. On the other hand, computers use base-2, or a binary numeral system, that includes only two numbers: 0 and 1. Chances are, this is not something that you need to know right away, but I recommend learning this concept one day. Knowing base-2 (binary), base-8 (octal), and base-16 (hexadecimal) can only help you (yes, there are more than just base-2 and base-10).

The following code shows the two possibilities, written in C#:

Now that we covered how to declare a variable of type bool, let’s look at the basic operations of Boolean algebra.

There are three basic operations in boolean algebra:

With AND, OR, and NOT, we can create most logical conditions that a program requires to run. Let’s start by exploring the NOT logical operator.

The NOT operator is a unary prefix operator and is different from AND and OR, which are binary operators. It prefixes a boolean value and inverts it. In C# (and many other languages), the NOT symbol is !.

More info: C# 8.0 introduced the ! as a suffix operator, a.k.a. the null-forgiving operator, which is a totally different thing.

The following table lists the two possible use of the negation operator and their outcome:

The following code uses the preceding grid to explore the possibilities using C#, outputting the values in the console:

When running the program, we obtain the following output:

As we can observe here, the value of the value3 and value4 variables are the opposite of their negated source. This is the main takeaway here: the NOT operator, in !variable, flips the original value of variable.

Next, let’s jump into the AND logical operator.

In C#, the conditional logical AND operator is represented by &&.

Important: It is essential to double the symbol, otherwise & (single) is a binary operator (acting on bits), and it is different.

The && operator is a binary operator that acts on two operands, like result = operand1 && operand2.

Here is an example of using the && operator:

The preceding code outputs Result: True to the console. Now that you may be wondering why true && true returns true, let’s have a look at the logical table of the AND operator:

As you may have noticed from the preceding table, all combinations result in false except when both operands are true; that’s how the AND operator works. Let’s update the preceding code to cover the true && false scenario:

This updated code outputs Result: False to the console, precisely like the table predicted.

Ok, we are not done yet. Next, we look at the OR operator, which has a similar syntax but a different logical outcome.

In C#, the conditional logical OR operator is represented by ||.

Important: It is essential to double the symbol, otherwise | (single) is a binary operator (acting on bits), and it is different.

The || operator, same as the && operator, is a binary operator that acts on two operands, like result = operand1 || operand2.

Here is a C# example of using the || operator:

The preceding code outputs Result: True to the console. Like the AND operator, the OR operator also has a logical table that comes with it. Let’s have a look:

The preceding code outputs Result: False to the console.

Now that we covered the basic operators, it is time to look at the logical exclusive OR operator, which is closer to the spoken OR than the logical OR that we just learned about.

In spoken languages, we usually use OR as an exclusive OR. For example, when we say, « do you prefer blue or green? » we expect a response about one of the two but not both. That type of OR is called the exclusive OR, also known as XOR. In C#, the XOR operator is ^.

Advanced information: the XOR operator is a compound operator, or shortcut if you which. We can compose the equivalent of the XOR operator using basic operators like NOT, AND, and OR. In C#, the XOR operator can be expressed as one of the following expressions: (left || right) && (!left && !right) or (left && !right) || (!left && right). In the preceding two code snippets, the parenthesis change the priority of the operations. The parenthesis play the same concept than in the following elementary mathematic equations (1 + 2) * 3 = 3 * 3 = 9 but 1 + 2 * 3 = 1 + 6 = 7.

As you may have noticed, the XOR logic table is the same as the OR table, but the result is false when both operands are true (first row). This is what differentiates OR and XOR: the result is true if one operand is true but not both.

When executing the preceding code, we get Result: True as the console output because one of the operands is true but not both.

Note: based on my personal experiences, this operator is not used very often. Nevertheless, I think it is worth knowing of its existence, for those few times.

Next, that’s your turn to practice what we just covered.

The exercise will focus on the logic part and not on the code part. We will use this knowledge in the next installment, where we will learn to write conditional code based on boolean logic. For now, try to answer the following questions without consulting the logic tables.

What is the result of:

Once you are done, compare your results with the answers below:

Good job! You completed another small chapter of your programming journey.

Then we looked at the compound operator XOR (exclusive OR). That operator helps simplify certain scenarios where you want a result of true when only one of the two operands is true but not both.

This is very important and will be used in subsequent articles to learn to use boolean algebra to write conditional logic. We will also explore more complex scenarios and some laws to help you simplify your conditional logic. This was a theoretical article that we will practice in the next one of the series.

All in all, Boolean algebra is one of the bases of programming that you can’t escape. Please leave a comment below if you have questions or comments.

It is now time to move to the next article: Using if-else selection statements to write conditional code blocks.